On 2Peas, someone remarked how they write a little note on the back of each layout they complete.  Something completely unrelated to the layout, but about the moment it was finished, along the lines of, “It’s a rainy Saturday, you and Dad just returned from the movies, and we’re having game night tonight.”  Kind of bonus memory-keeping, if you will.  She imagines that one day her kids will notice it, and have a great time flipping through all the layouts, finding her little notes, and reminiscing.  I love that, and I plan on doing that from now on.  I think I might do it with my blog posts, too.  So my aside for today:  It’s a gorgeous day for November, I’m on bedrest with Baby Beanette, and am very much looking forward to Thanksgiving, just the 3.5 of us, later this week. 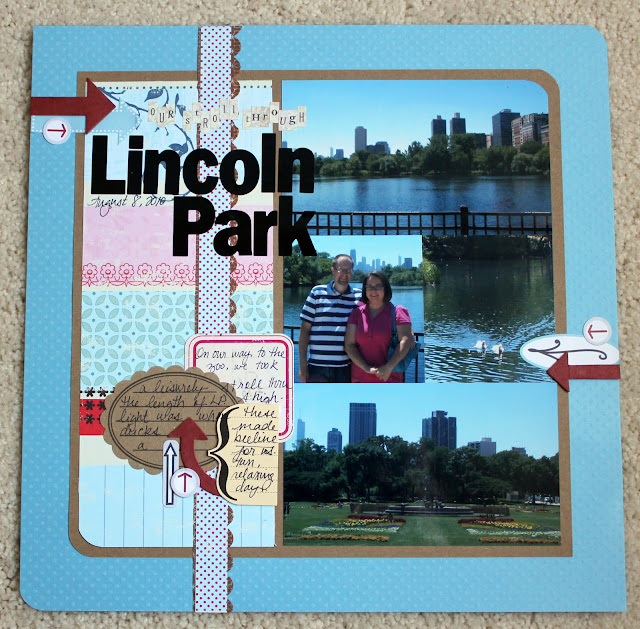 This is the danger of waiting too long to scrap photos…  I loved the pictures, but baby brain ensured I couldn’t remember where we were (And Ali, if you’re reading this, and I’m wrong, don’t tell me, I can’t re-do it now! lol), so had to do serious recon work to figure it out.  And I probably had enough to say that I could have made a 2 page layout with some extensive journaling, but let the design part get to me and I crammed a couple sentences onto some journaling spots and called it done. :-/  But you know my philosophy, done is done, and I can always add more journaling to the back. 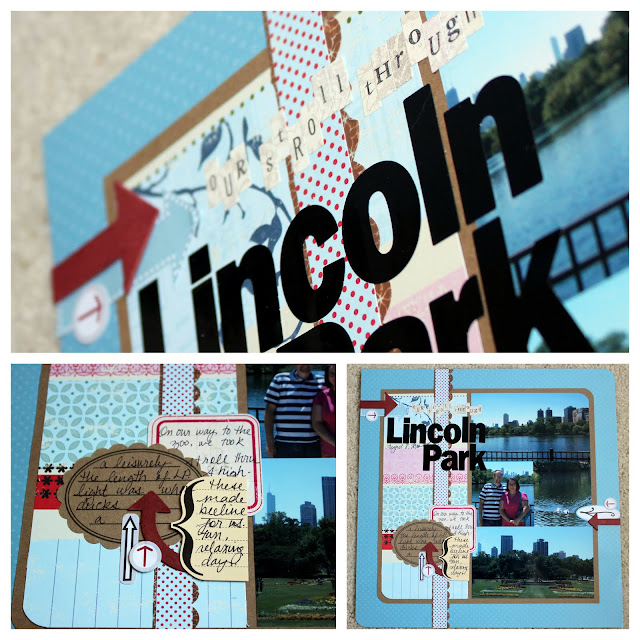 I actually really like how this layout turned out.  I used some older MM paper, I figured a travel line was appropriate for, you know, traveling…  And I like how the collage patterned paper makes it look like I did a bit more work than I remotely actually did.  I went with arrows as my embellishment of choice (get it, stroll through…  travel… motion…  arrows… eh, I think it works).  Between this and one I’ve been working on for the duration of my bedrest (3 weeks now), I will have seriously depleted my arrow embellishment stash (wait ’til you see it, I think it’s turning out fun!).  Good thing Silhouette’s having their Black Friday shape sale, I’ve got a 12 arrow set on my wishlist so I can replenish. :-) I liked that I made a good dent in my letter sticker stash, too.  Then I used a strip of patterned paper over some Studio Calico scalloped woodgrain tissue border–I love that tissue stuff, so cool-looking (even though I practically buried it on this layout), and a fun texture.  TFL!

Hi! If you’ve never been here before, welcome and thanks for visiting! Today is the Counterfeit Kit Challenge Blog Hop. I just discovered this challenge blog this month, and really love the concept. You can check them out here if they are unfamiliar to you or if you’d like to check out the blog hop from the beginning. And you can check out all of my Counterfeit posts by clicking here (and I still have more stuff to share from this kit, so please come back!).

The challenge for the blog hop was to scraplift yourself. I have to admit that I already do this quite often. I use the same layout design over and over and over again. I like white space, grouping photos tightly together, and creating a layered title. I do these things in a variety of ways, but I do them again and again. So really, anytime I scrap it is likely that I am scraplifting myself in one way or another. Here’s my past layout that I used as inspiration:

And here is my new version, using my March add-on kit, Fauxflower:

From the original, I kept the cockeyed orientation of the two side by side photos, stuck journaling off to the left, and built the title to the right (although it is moved down more to center since the righthand photo was horizontal orientation, and thus longer than the original layout). (Also, the ice cream cones were originally homemade flower embellishments, but a little crimped paper turned them into waffle cones.) :-) I didn’t have a diecut background piece, but used a scallop border punch on the top and bottom to emulate that. I used rhinestone brads and glitter stickers to echo the bling used on the journaling block butterfly of the original. The original layout used non-vintage, but vintage-looking Jenni Bowlin paper. I used some vintage-looking paper (the retro couple background piece and popped by the title) and some actual vintage (shorthand training manual). What do you think?

Thanks again for stopping by, and enjoy the hop! The next stop is Jessica’s blog–click here to visit!

Everything is from my main March Counterfeit Kit, except for one letter sticker.  :-)  Looks like it should have been fairly straightforward, but I strayed majorly away from my original sketch, and had to problem solve using 8.5×11 vellum on a 12×12 layout, etc.  So this much more time than it should have…

Placed the title to create a green-outlined-in-brown visual triangle with the leaves on the top and bottom right.  Used my Silhouette to cut said title.  Gotta love that offset feature!!

Added little captions using a scallop punch and hand-trimmed circles, accented with buttons.  The “buffalo?” “bison?” captions are a little joke, because our tour guide was never clear on what we should actually call them (I believe the proper term is bison, “American Buffalo” is sort of a misnomer.).  And I successfully resisted the urge to title this layout “Elk Butt.”

I know, I’ve been cranking out the layouts.  I’ve been trying to take it easy the past few days, and have been really enjoying scrap challenges lately, so I’m striking while the iron is hot!  I made this layout for a Jenni Bowlin Inspiration challenge, and used some JBS paper, rub-ons, and tickets.  The pics are from our Wyoming trip from this summer.  This super cool historic park bus was on display at a hotel that we stopped at during our tour of Yellowstone–it was just gorgeous!

Technique-wise, I did some basic stamping on the yellow ticket next to the title–my first stamp to be used for Stampin’ Out 2011 (using all my image/sentiment stamps at least once this year–and if I don’t, out they go!)  Lots of ink blending to age a white journaling tag that I cut in half to back the title, with Old Paper, Scattered Straw, and Soot distress inks.  Otherwise, kept it simple, as I’m wont to do.

1) On the road  car stamp from Travel 2 CD (referencing my stamp organization system so I can keep track of what I’ve used!)

Yeah, so, I did the title “chicago zoo” before I had to look up some animal and figured out the zoo is actually called Lincoln Park Zoo.  LOL  OH WELL.  I’m not redoing it!

Cut the filmstrip frames with my Silhouette–modified a free image from Kerri Bradford.  Took some doing–a fair bit of measuring and problem-solving, but I was happy with how they turned out.  Backed the title with some of the cutout pieces from the filmstrips.  If I had it to do over, I’d not do frames–just a solid black down the middle, then crop and corner round the pics and stick them on top–would have been much easier!!!  Purple rhino is a tag I bought in the LPZ gift shop.

Sorry for the cruddy picture, but it’s late, I want to post, and this was the best I could get without daylight.  Besides, I’m not totally enamored with this layout, so I’m not super concerned about getting it in the best light anyway.

Another challenge at ScrapJazz.  This time, we were to incorporate orange, yellow, flowers, ribbon, and brads.  My background piece is burnt orange patterned cardstock; The focal photo mat and a stamped flourish on the journaling block are my yellow touches; the tiny yellow flowers behind me in the pic are my flowers (yeah, I kinda’ cheated), then I added a knot of ribbon and some mini-brads around and about.  Some pen outlining and basic black distressing helped give the background piece a bit more definition…

And the whole reason I’m posting?  So I can count it towards YAWYK.

In no particular order, layouts I haven’t shared yet!  And the last of YAWYK!

I may have scrapped these pics before…  not sure.  These were taken during our staycation in May 2009.  We stayed at a hotel on the Plaza in KC and roamed through the Nelson-Atkins art museum and grounds.  I thought I may enjoy looking back at this picture one day and remembering what it felt like to be at rest–I have a feeling we will have a shortage of that in our lives from now on!

I used a free shape that came with my Silhouette, scattered it across the background in various sizes and placements, and welded it together to make the purple layer.  Then I used the offset tool to create a shadow effect with gray cardstock.  I used my clear sparkle gel pen to add dots and extend the lines of the background piece.  My favorite touch is the little bit of rhinestones, all about.

This is awful, but I think it was a sign of things to come.  I actually made this layout a few weeks before leaving facebook entirely.  I saw these vellum quotes on clearance and the snark cracked me up.  They also made me instantly think of FB.  You know, all the fake status updates?  And I have stories, people.  Stories of undergrads who stacked up several hundred FB friends like firewood, including crazy ex-boyfriends, and would let page after page of status war drama erupt when they got a new crazy boyfriend instead of, oh I don’t know, defriending the ex?!  Some people were constant Debbie Downers and that’s one of my bigger pet peeves.  Plus dirty laundry that didn’t need to be aired…  The list goes on and on.

OK, this photo is all kinds of a hot mess, but bear with me.  I re-stuck-down all the loose-coming-up bits, but apparently didn’t bother getting another photo of the LO.  Just trust me it looks better in real life!  You also can’t tell, but the top of the layout is punched in the same scalloped manner as the journaling labels.  A favorite LO of mine, for a lot of reasons.  :-)

Birth announcement from some friends–amazing story.  They adopted the little boy, and while in Africa to finalize everything, found out she was pregnant with this little girl!

A better look at all the acetate I managed to use up, and how nicely the flourishes in the background cardstock, acetate pieces, and on the actual birth announcement work together!

From the same staycation the first layout’s pics were from…  The fun thing about staycation is that we both get to go out and let loose a bit, without worrying about a designated driver–that’s what cabs are for!  So we camped out on the Plaza, listening to a pretty horrid cover band…  but it was still a lot of fun.  There was a funny pic of me with what I call my “fish face,” all googly eyed, but there wasn’t really room on the LO for it (thank goodness for small miracles…).  The zebra patterned paper and the colors in the background were all lifted directly from the shirt I was wearing, a red and black zebra print tee.  Oh, well!