Merry almost-Christmas! It’s zoooooooooming up to Amy B’s first birthday, much more quickly than I’d like, so I thought I’d best be documenting her birth story soon-ish!

It was late May, 2012.  Bubbaroo had just turned one, and school had ended for the year.  We were on vacation, but I was so tired, all the time…  Hmm, that felt familiar…  So we dug out a leftover pregnancy test (and of course confirmed with as many other different pregnancy tests as I could buy), and received a wonderful surprise!  It had taken so long to get Little Man, we were shocked when Beanette showed up so quickly, but we were also thrilled. As much as people liked to tell us we were nuts for trying (and succeeding) to have a second baby so soon, we had our reasons, and it was a lovely, planned-for surprise. :-)  We had had such a positive experience with Bubby’s birth that we decided to keep as much the same as possible for Beanette’s birth.  We immediately hired the same doula, made appointments for my doctor, and began spreading the word that we were expecting again.

This was such a fun way to announce our news.  I just chopped up and hand-stitched an old onesie, then used my foam stamps and some acrylic paint for the design.  This was our best picture (man that photo shoot was frustrating! LOL) and we first sent the picture to be developed at the one hour photo at the WalMart in my hometown. 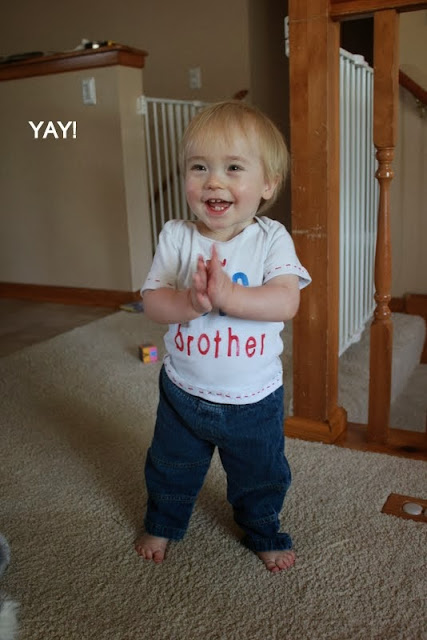 My parents were on their way to a family gathering, and I sent in about a dozen of the latest pictures of Little Man, including this one, and then told her to stop and pick them up before she went to the family party.  Then we waited…  That phone call is, I think, my favorite one to ever have received–her in the car, with Dad driving, her sputtering, “You’re kidding!!!!!!!!!!!!”, and explaining how perfect it was, as it was the last picture in the stack. While we waited, we skyped with my in-laws.  I came on first and told them I wanted to show off a shirt I had made Bubby, then pulled him into the frame, wearing the shirt. :-)  Later, I emailed a couple close friends with the picture, too.  One of them hadn’t opened the email after a few days, so I finally called her and said, “I’m really sorry to bother you, but I have to insist you go look at that shirt I made Little Man!” She laughed, and said, “I know, I’m sorry, people like to show off when they’ve made something new.”  Then it was my turn to laugh, and I said, “You are more right than you realize!!!”  So she opened it up while on the phone with me, and that was a fun phone call, too.  When I hit the three month mark, I uploaded the photo as my new profile pic on Facebook, and tagged my husband in it.  So we definitely got our mileage out of this one shot!To be continued…