Okay, he’s OUR sunshine, but you know the song, that’s not how it goes! I first saw this theme on the Design Dazzle blog, when Bubby was just a bun in the oven. And I loved it. I loved the song, especially ever since I sang it for hours, to all the tiny babies, rocking away, at Children’s Mercy Hospital while working in the NICU. And he really is just a super happy baby. :-)I didn’t use most of the ideas I saw there, even though I liked them all. $$ for one, time for another. I did decide to make some bunting and signs, and we went with cupcakes, similar to the blog.

Here’s the sign greeting guests and directing them to our backyard: 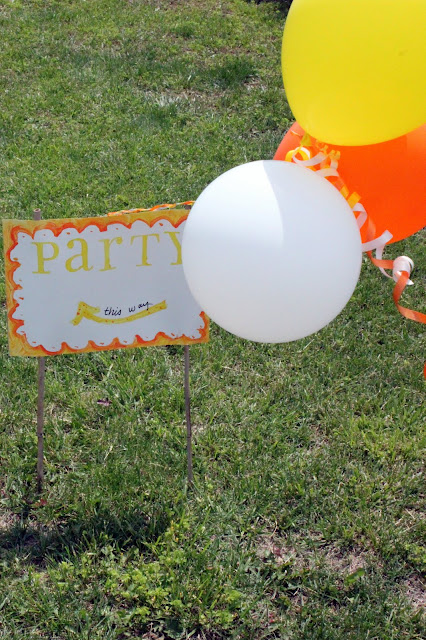 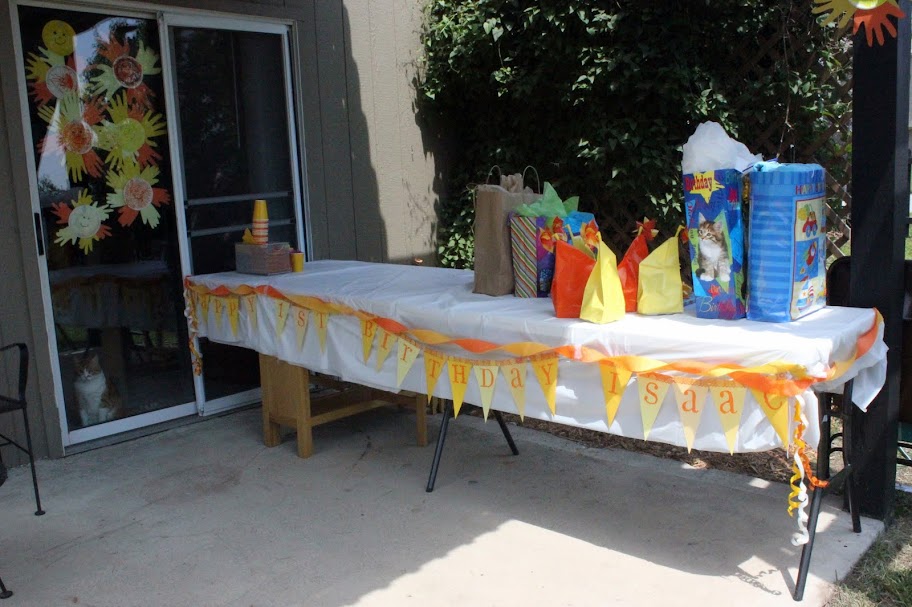 Then back on our patio, we set up one of our folding tables and my parents brought one up, too. The sun decorations were an art project that my students completed. ::love:: The bunting was just yellow cardstock and patterned paper from my stash, using paint and some big foam stamps, and adding a punched border with some orange/gold sun/summer patterned paper. The favor bags held a big pinwheel, some “sunshine” trail mix (dried mango, banana chips, and sunflower seeds), yellow party horns, sunglasses that my Mom found at HL, and bubbles. 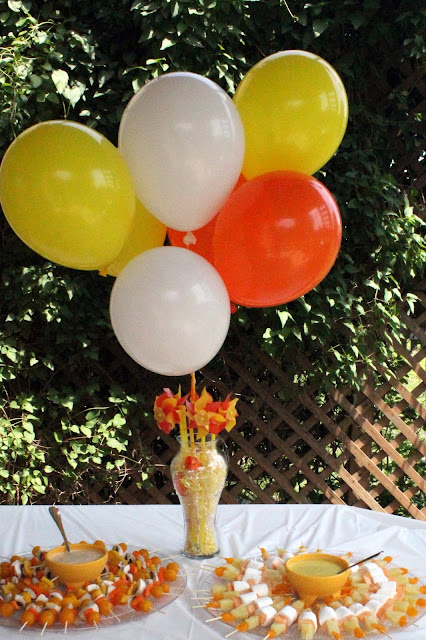 Then in that empty space up above, the food and centerpiece fit in perfectly. My mom worked a long time, getting the veggie-kabobs and fruit-kabobs set up. I love it because–hello, arranged just like the theme–and they were easy finger foods. And see, matching sunburst trays, borrowed from school. How perfect! Unfortunately, the centerpiece couldn’t stay up for the party. The wind kept threatening to blow it over, and I didn’t want giant shards of glass all over the patio. (Pretty simple, it was just a vase filled with balloons, pinwheels, and a mix of shreddy stuff.) We also had orange and yellow jello jigglers in 2 different sun shapes that my Mom made. They were so cute! And the kids loved them. 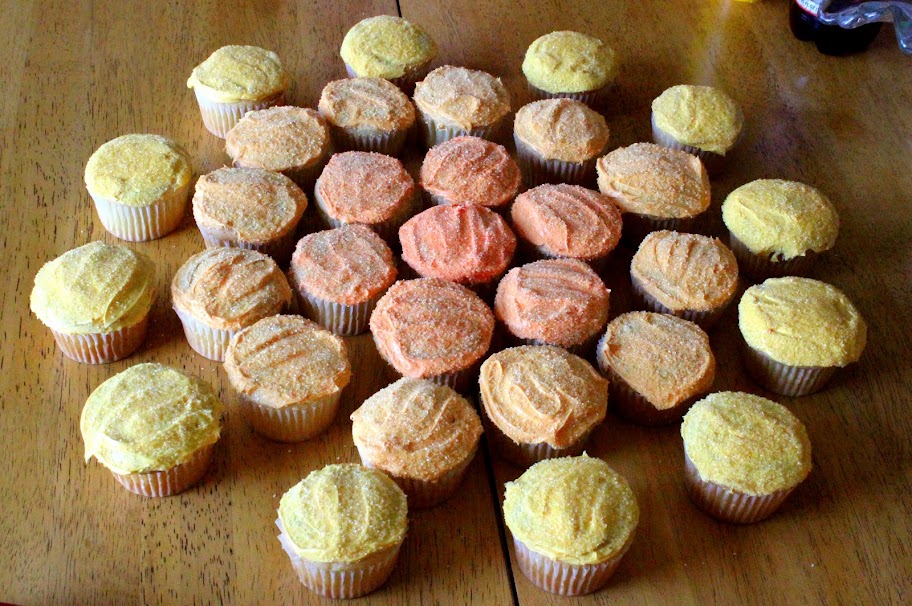 Thomas made these. I found a box mix that had a way to do fillings, so we did that, and then Thomas tinted the icing in gradiated shades of yellow. ::love:: Then they were arranged so they faded outward. I put them on another clear tray with a sunburst design. It’s the little details like that that just make me giddy. I know it’s silly and unimportant, but it’s fun and I’m just trying to make it memorable. 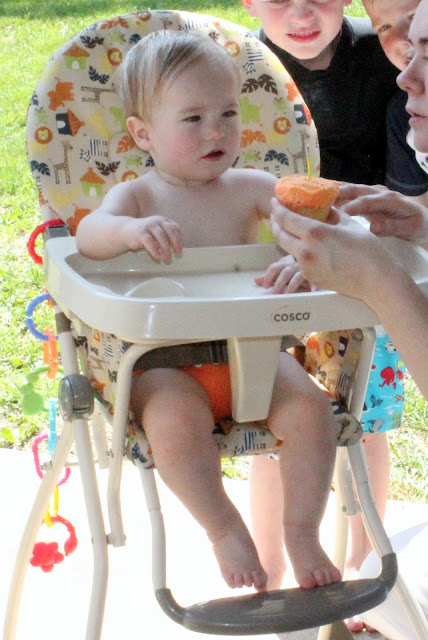 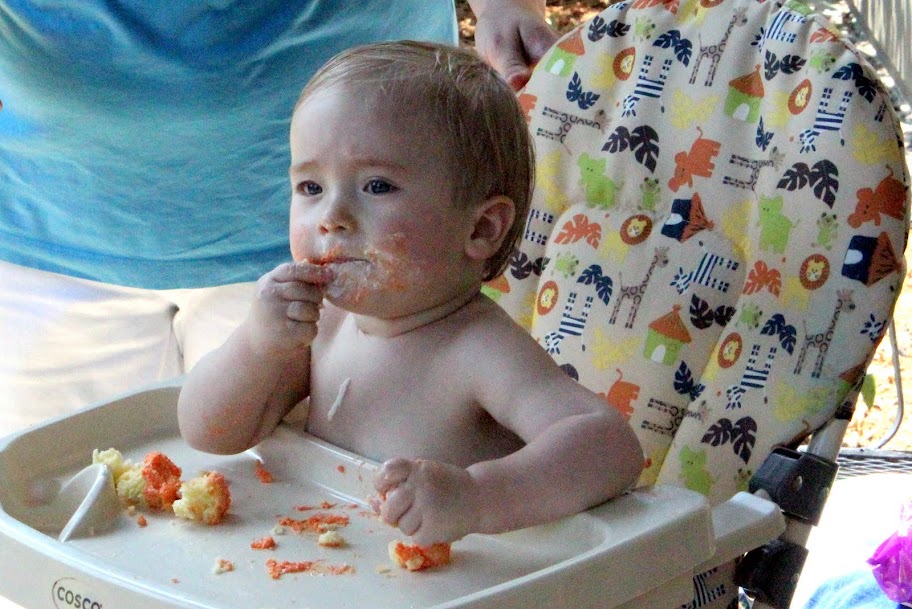 He got some fun gifts, too. This AMAZING monster quilt that Thomas’ mother, Jane, made: 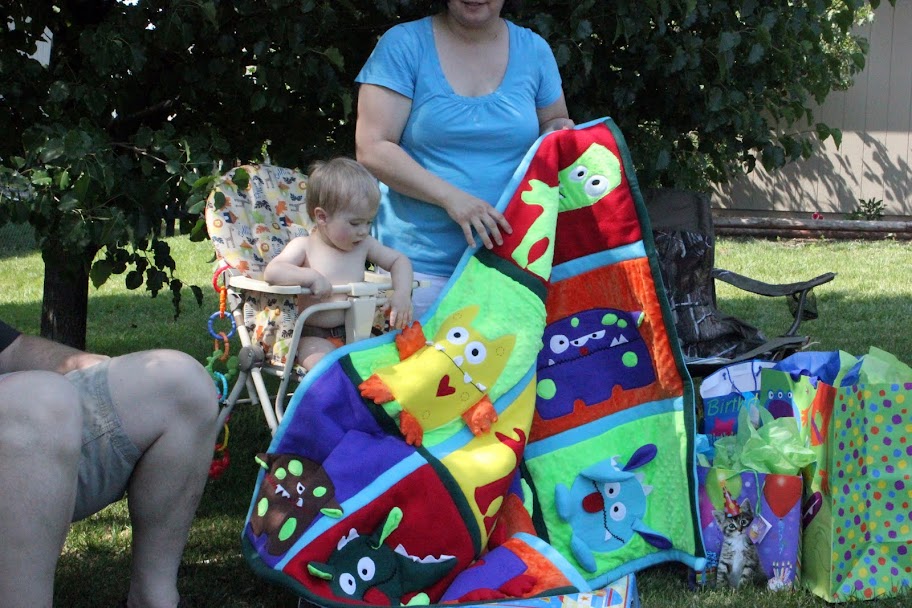 And this SUPERCOOL toy box that my Dad made: 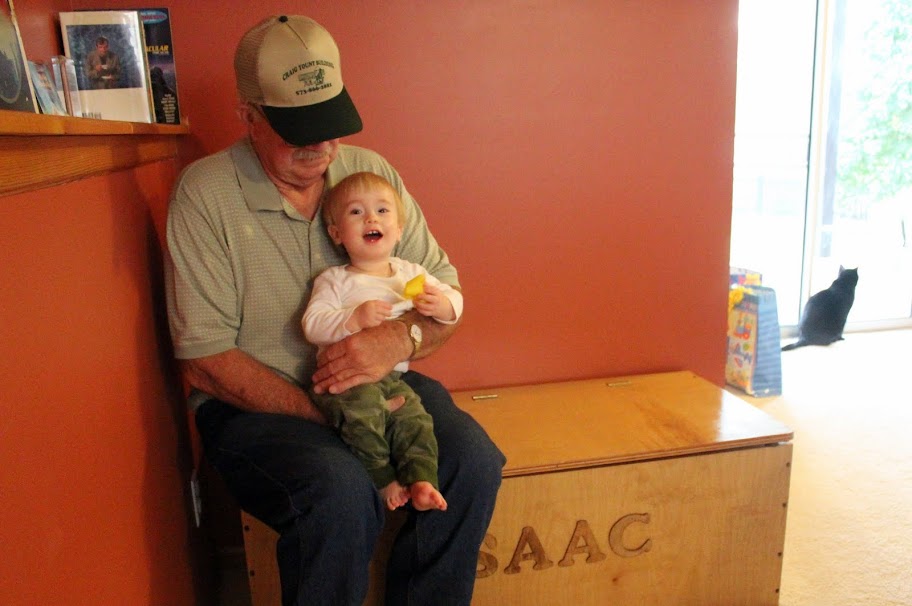 He loves to lay on the quilt and play with the monsters. And he toddles over to the toy box, says, “Adieu?” (I have no idea what he thinks he’s saying, but that’s what it sounds like, and it is his all-purpose phrase du jour.) Then one of us opens the toy box for him, and holds up toys for him to choose from. He either dismisses it by shoving it back in the box, or grabs it with both hands and a giggle. I’ve been trying to get us all in the habit of putting up the old toy when a new toy (or 3) appear, and now he will also walk over and place the toy on top of the toy box and say and sign “done!” to let me know he’s finished and would like a different toy. HOW ADORABLE!!!! ; I’m just gaga over him. Seriously. In case you can’t tell! 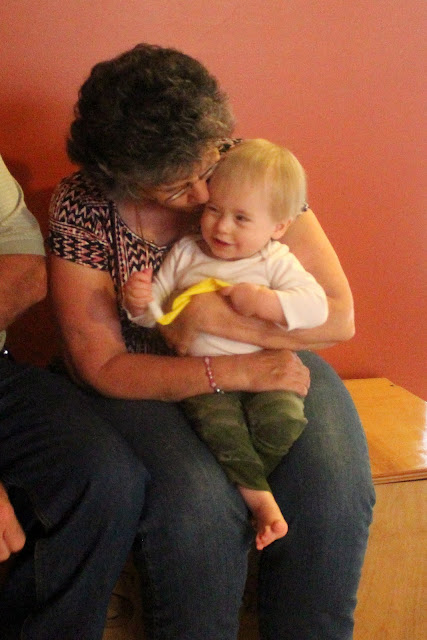 Here’s someone else who seems to be gaga for him… (My Mom) She bought a big stack of books for him, and one of them is recordable, called “That’s What Grandmas Do!” She and Jane recorded it right before the birthday party. He loves it, he gets it off the shelf and flips the pages and talks back to it. :-)

Here’s Jane, and Uncle Mike, and Grandpa Dan with the guest of honor: 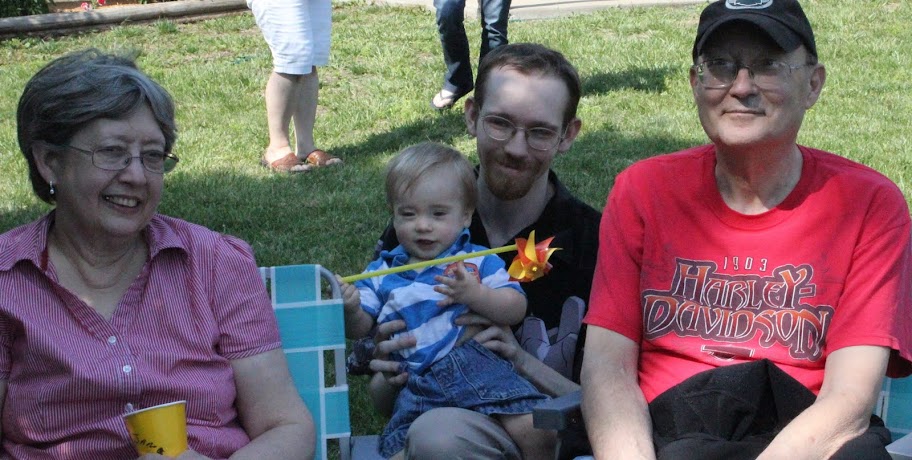 And Grandpa Dan pushing Bubby in the swing: 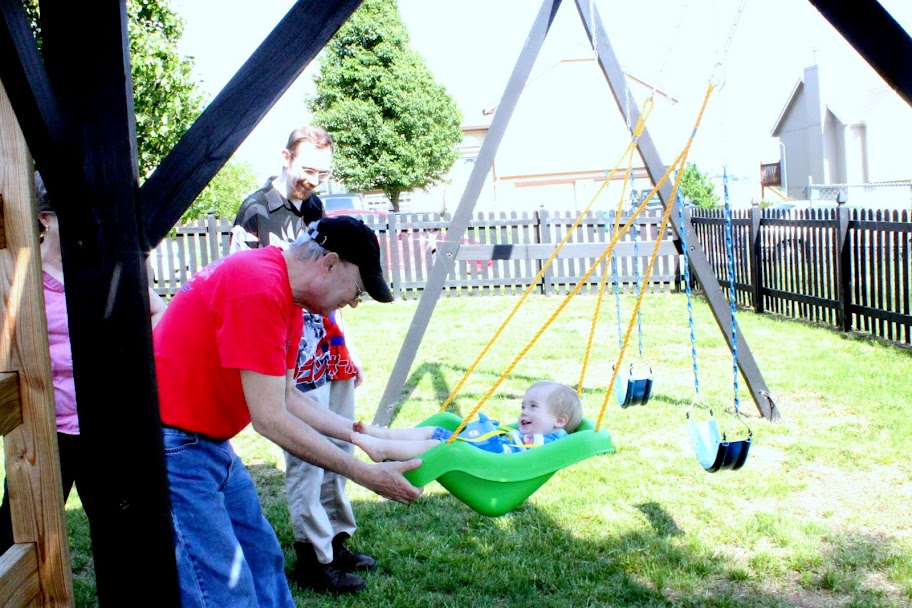 There were four other families there, but three of them have little kids, so I don’t feel comfortable posting their pictures. You’ll just have to imagine the four boys running around like hooligans with their party horns and sunglasses, super cute. And they enjoyed the sprinkler we dragged out (can you believe it was the first weekend in May and 90 degrees?!?). They also enjoyed Bubby’s present: a finished swingset (really, finished for them) and a sandbox (okay,that one was all for Bubbaloo). 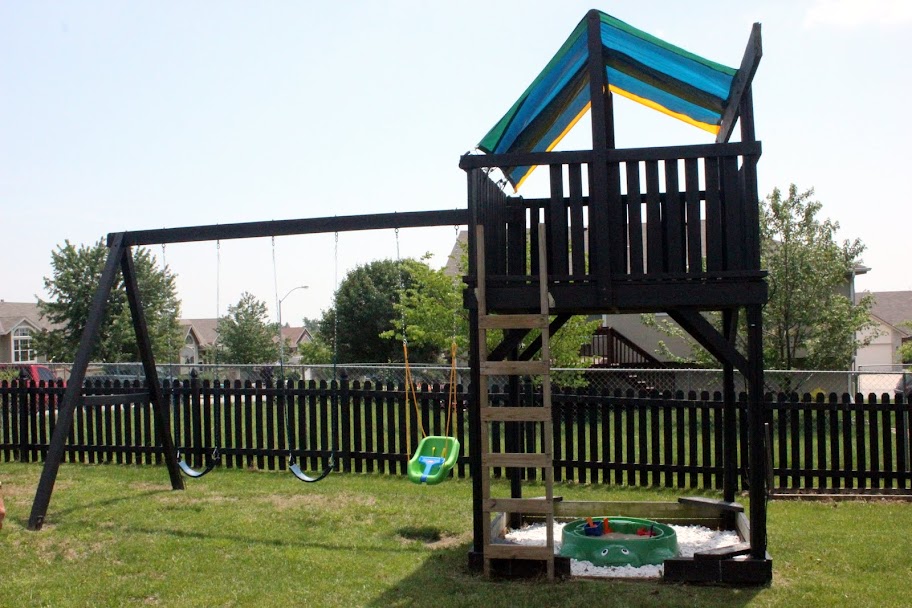 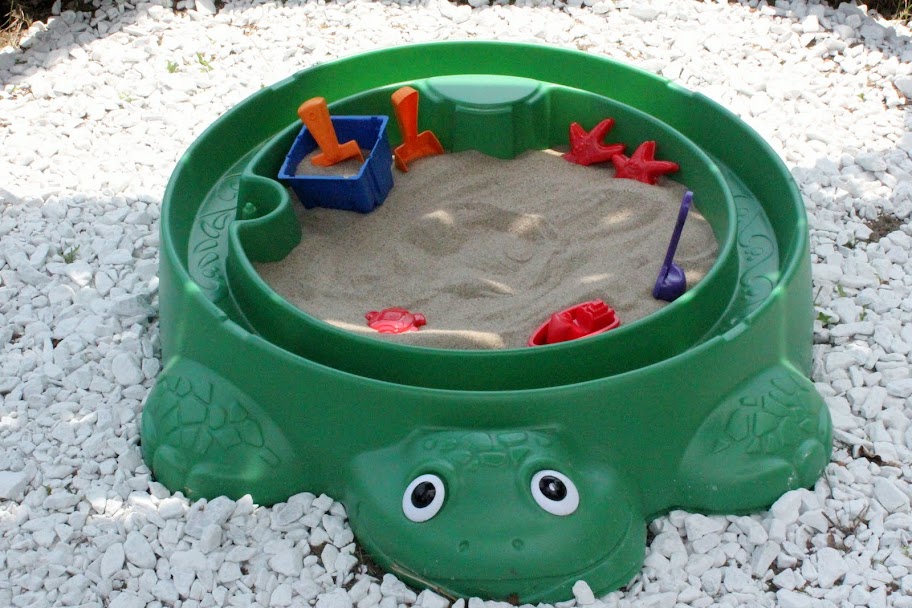 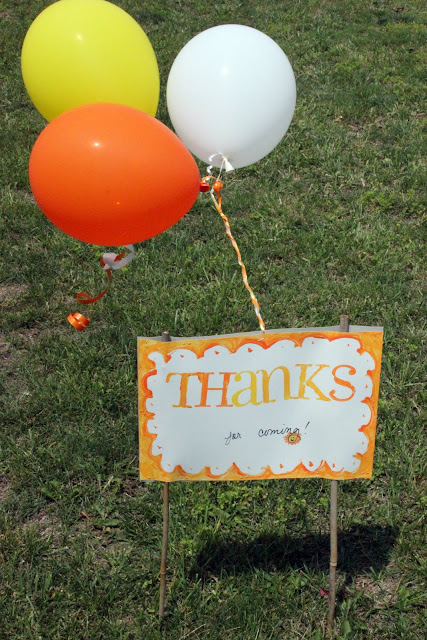 2 thoughts on “1st Birthday–You Are My Sunshine”